This is for the Venetian Bronze one.


Not all time low as per CCC but good price compared to previous deals.

Amazon product: Weiser Powerbolt 2.0 Electronic Deadbolt Featuring SmartKey, Exterior Door Lock with Keypad, Venetian Bronze (9GED14600-102)
Customer Reviews:
I bought both this Weiser Powerbolt 2.0 and the Weiser Smartcode 10. | Aside from having 15625 possible combinations for a 6 digit code comparing to more than 999999 combinations for the Weiser SmartCode 2 (I am just too lazy to calculate the number for up to 8 digits code) , the Weiser Powerbolt 2.0 beats the Smartcode on everything else: | 1) Mechanically, this is much easier to install. Everything is straight forward thanks to the clearer instruction. Better yet, the video that accompanies the listing of this one on Amazon is its installation instruction, instead of a commercial as for the Smartcode 10. | 2) Setting the code on this one is a breeze, comparing to the Smartcode 10. The instruction for this lock also has a section for setting the Master Code, instead of having to go online in the case of the SmartCode 10. | 3) It takes a few more code-punching steps to set the auto-lock on this one (to be fair, you only have to flip the switch on the Smartcode 10); but you can have a few different auto-lock timing for this one than the SmartCode 10, which allows you to go up to 60 seconds instead of just 30 seconds like the SmartCode 10) | 4) Changing batteries on this one is, again, a breeze comparing to the SmartCode 10. You only have to lift and pull the cover, change the batteries, then close the cover again instead of having to remove the three tiny screws, pull the battery-pack, change the batteries, put the battery-pack back in, close the cover, find the tiny screws and try to screw them back on as for the SmartCode 10. | For me, I think that 15625 combinations is quite secure enough (would be a lot more if you use 8 digits code). Also, if you are the one who will have to replace the batteries on these later on, pick this one. | Hope this helps with your lock selection… 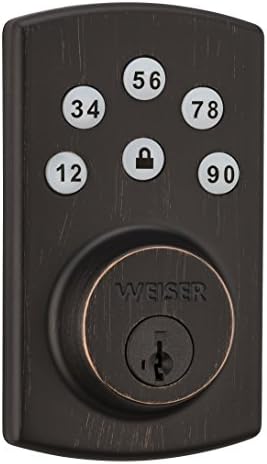