Please let me know if I’m missing any other details. I don’t post a lot.

Amazon product: Seven Worlds, One Planet (BD/4K) [Blu-ray]
Customer Reviews:
I am nature documentary lover and have collected every single documentary BBC has produced. When original “Blue Planet” premiered in 2001, it was the most expensive nature documentary series ever made exploring planet’s oceans. It was brainchild of filmmaker Alastair Fothergill who convinced BBC to spend $10 millions. The investment paid off and drawn huge number of viewers to the series. BBC’s natural History Unit then followed it up with Planet Earth—an even more ambitious and more successful show that became blockbuster. More shows then followed – Life, Frozen Planet, Africa, Life Story, The Hunt, Planet Earth II, Blue Planet II and now Seven Worlds, One Planet. | While “Planet Earth II” followed “Planet Earth” by a decade, “The Blue Planet,” the original instalment of the BBC NHU’s documentaries, debuted almost 20 years ago. Needless to say, the technology available to filmmakers covering the natural world has made leaps and bounds since then and Blue Planet II was another staggering visual accomplishment, following on the heels of ‘Planet Earth II. When I saw Planet Earth II few years ago year, I thought that BBC’s Natural History Unit has perfected art of perfect natural documentary. Seven Worlds, One Planet proved me wrong and it surpassed their own standard of excellence. This documentary is simply breathtaking, moving and gorgeous. | This series is divided in 7 episodes – title refers to earth’s seven continents, each of which gets an episode. This set includes 6 discs – 3 UHD 4K (2160p/ Dolby Atmos and DTS-HD MA 5.1) and 3 Blue-ray discs (1080p/Dolby Atmos and DTS-HD MA 5.1). Here is the Episode Listing: | Episode 1: Antartica | Episode 2: Asia | Episode 3: South America | Episode 4: Australia | Episode 5: Europe | Episode 6: North America | Episode 7: Africa | SPECIAL FEATURES | Visuals are simple stunning, breathtaking and hypnotic. The sound quality is amazing. Series showcases diversity of each of seven continents and what makes them unique. Series was filmed across 41 countries including Canada with a crew of 1,500 and over 1794 filming days. The series reveals new astonishing creatures and new extraordinary animal behaviours and filming animals like polar bears, sharks and the last northern white rhinos on earth, to name a few. The golden-haired, blue-faced, snub-nosed snow monkey one of the stars in the Asia episode. | This series engages viewers both emotionally and intellectually and only thing I can say is you would not be the same after watching. Not only showcases how astonishing and wonderful these continents are, but also shows how they integrate with each other and how human footprint affects our wonderful planet and animals. | Sir David Attenborough, at age of 93 continues to be a marvel and still giving us such a nice documentaries and narration. There is no one like Sir David Attenborough for narrating nature documentaries; with his signature style British wit. Overall this series is about magnificent and jaw-dropping visuals, David Attenborough’s remarkable, warm, intelligent voice. Seven Worlds, One Planet takes nature documentary making to another level. It has implied but clear message to all of us – stop wasting resources, stop polluting the plant and care for nature and animals. This series differentiates itself from past documentaries by addressing human depredations — climate change, deforestation, predation — more directly than in the past. | The BBC Natural History Unit has really outdone itself. This documentary is a truly sublime accomplishment, an epic achievement that everyone should watch. 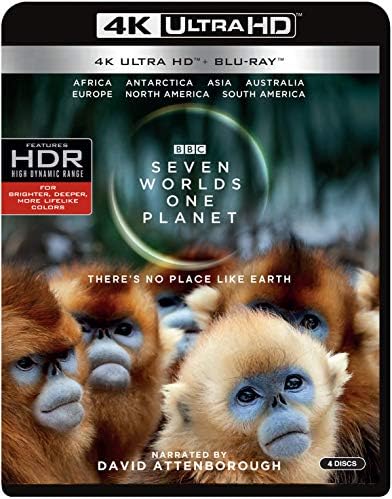