Amazon has a $52 coupon for these:

I believe these were cheaper during the lightning deal last year. Still seems like a decent deal for something that sounds better.

Personally picked up the Bose QC35 IIs on sale. Thoughts about these?

Amazon product: Sennheiser PXC 550-II Wireless – NoiseGard Adaptive Noise Cancelling, Bluetooth Headphone with Touch Sensitive Control and 30-Hour Battery Life
Customer Reviews:
I have lived in these for 9 months now. I work from home, while traveling, and often with toddler nearby. As soon as these are on my ears, music or not, the active noise cancellation is enough to put me in work mode. Adding music makes it impossible to have audible distraction. Great to be connected to more than one bluetooth device at a time, and switching between them (albeit not quite seamlessly though that’s more due to Win10 than the cans) for Skype calls, phone calls, music, and streaming audio is wonderfully convenient. | Pros: | Comfortable earpads and band, very good for long periods of wear over 3 hours | Very good bluetooth strength and connection across multiple devices | CapTune app allows decent customization of sound stage and options | “Effect mode” allows quick switching of EQ without app | Fantastic noise canceling. Really top notch. | Fairly easy to use touch interface on right headphone | Look sleek and low-profile compared to competitors and other models | Unbelievable battery life, simple recharging | Built-in mic array allows for headset use in non-noisy environments | Can be used with included 3.5mm to 2.5mm cord with mic for non-bluetooth connections | Pack small in included case | Auto on/off with turning the can to wear | Great sound stage well balanced across textures | Prioritizes connected device which most recently initiates a sound. That is, if streaming music from laptop and the phone chimes, it will play the phone chime and then return to streaming from the laptop. | Cons: | Pricey against competitors (though I believe the quality is worth it) //EDIT: Purchased 2016 December at $549.99 CAD, as at 2020 March at $280 CAD. VERY GOOD DEAL now. Have recommended to several other friends even 4 years later and still the best cans around at the price point.// | Ears just barely touch the speaker pad inside due to low profile shape of ear padding. | CapTune contains options which severely degrade the usability of the headphones, like Smart Sense, which will try to follow your movement if you take off the headphones (but don’t turn them off) and pause the music for you. It tends to screw up music playback and calls more than help, and you can’t figure out why unless you turn off options one at a time to figure it out. | “Recharge headset” audio feedback happens too often during wear. I get it, I’ll recharge them. Until I’m at 5% though, don’t tell me every three minutes and cut out my phone call to do so. It is possible to change this to a chime only which is less intrusive, but it is also less informative for other options like setting which Effect Mode you are using (you have to guess based on the change in music/speech). | Touch interface takes some getting used to as it’s not perfect or similar to most other touch-UI devices like phones. It requires a slightly longer press less than a second and a finger pad rather than finger tip. Have not tried with touch-sensitive gloves but I expect it would be quite difficult based on the nuanced movements required. Have found I hang up calls if I stretch above my head with both arms and my arm touches the headphone. | Mic array works well in non-noisy environments or when facing a laptop or other close sound reflective surface. Mic response suffers a bit when trying to speak in a larger space or when pacing around. Still VERY good mic and sound overall, however. | 3.5mm to 2.5mm cord seems unnecessarily proprietary. Would a 3.5mm jack in the headphone have taken up too much space that was otherwise occupied? | Design of headphone band connection to can excellent, just a heads up that it will definitely catch on even a short beard if wearing them around your neck in “off” position for more than 10 seconds. | Overall: | Buy these if you fly, work, or need to have sound isolation on par with NRR30 plugs. It’s like stepping into an anechoic chamber, but with the option to play music and take calls. Worth the price. 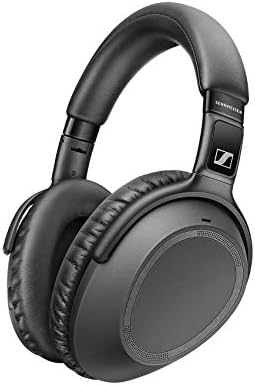