Was looking for options to extend my wifi around the house, basement has poor wifi reception, came across this amazon warehouse deal that still has the prime 20% savings upon checkout. Good deal?

Amazon product: NETGEAR Orbi Whole Home Mesh WiFi System (RBK13) – Router replacement covers up to 4,500 sq. ft. with 1 Router and 2 Satellites, Dual Band WiFi Kit
Customer Reviews:
I’m a systems integrator and have purchased and installed three (3) Netgear Orbi Systems to date in three different homes. | My experience with Orbi has been mostly positive. Installation is very straightforward and easy. You must download the Orbi app and follow the onscreen instructions on the app to activate your Orbi system. There is no way to configure the Orbi System without using the app. | The design of the Orbi Router and Satellite are unconventional and you’ll either love’m or hate’m. The have an acronym in the consumer electronics industry WAF which stands for Wife Acceptance Factor. The Orbi units are large which generally isn’t a good thing but they are stylish and look like like a vase so my wife for example doesn’t mind when I placed the Orbi Satellite on the side table in our dinning room. If I tried to place a regular Black Box Extender with LED Lights and antenna’s sticking in our dinning room my wife would have shot me, but the Orbi blends in and doesn’t look out of place. Aside from performance, one of the biggest benefits of Orbi is the ability for it to be placed out in plain sight and blend into the decor of the room. | When it comes to performance I’ve had two great experiences so far with Orbi Systems and one mediocre experience. On the positive I’ve had some of the best Wi-Fi Coverage and Speed performance when using Orbi systems in larger homes. Two of my installations were Wi-Fi only and te dedicated backhaul radio works great and doesn’t slow down performance of the other two radios on the network. On the other installation I had a wired connection between the main router and satellite and that worked great as well. Compared to stand alone routers and routers with extenders the Orbi System is vastly superior. The first benefit is a single SSID throughout the Wi-Fi coverage area, no more switching or hopping between the main router and extended with Orbi the transition from main router to satellite is seamless. Another benefit of Orbi compared to some other mesh networks I’ve tried is the built in 4 port Gigabit switch in both the main router and satellite. Most mesh systems have only 1 or 2 hardwired ethernet ports on their devices, some don’t have any on the satellites but with Orbi the Router and Satellite both have 4 ports … this saved me having to purchase an additional switch. | While most of my experience with Orbi has been positive – there are a few areas they could improve on. First off on two out of three installations where I used the Orbi System, the Wi-Fi coverage, network speed and consistency improved greatly. Orbi was quick and easy to set up and solved all the Wi-Fi coverage issue in two homes I did. On my third install of Orbi the installation went great however the improvements to Wi-Fi performance were nominal. In my third house with Orbi the Wi-Fi coverage initially seemed to improve however it I began to experience wide speed fluctuations and dropouts. I tried reconfiguring the network several times but no matter where I paced the main router and satellite or what channel the router was communicating on there was not significant difference between the Orbi System and a Stand alone router. | As they say Two Out of Three Ain’t Bad … | I don’t know why the Orbi System didn’t work so well in my third home but it did significantly improve the Wi-Fi coverage and speed in two out of three installations so far and for that reason I would still recommend it to friends and clients. | Wireless technology can be unpredictable so your never can be certain if a wireless device will meet or exceed your expectations until you actually try it in your environment. For this reason I recommend you purchase this Wi-Fi system from a merchant that has a good return policy. Odds are this Wi-Fi system will work great for you but … if it doesn’t it’s nice to know you can always return it for a refund. 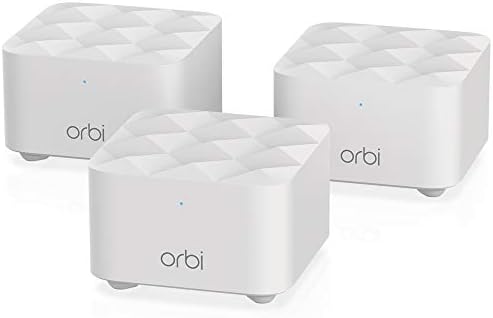