Lowest price I’ve seen it, seems like a good deal if you are looking for a new game on switch to play during the possible second lockdown.

Amazon product: Mario + Rabbids Kingdom Battle – Switch
Customer Reviews:
It’s really hard to place this game in any specific realm. I LOVED the Paper Mario games (Well, even the newest one. That one was soft, but still fun.) I LOVED the platforming of the normal Mario games, all the way back. Where would I place this? To me, it feels much like Paper Mario, but less RPG-ish (Which it is still heavy RPG) and more combat strategy. It’s tough, so adults who are hell bent on getting every level perfect will struggle but still enjoy. However, this does not negate it for children either. My daughter has just as much fun with this as I do. And that is something I feel Ubisoft hit square on the head. A way to make adults and children have fun in a strategy game. | Imagine if Heroes of Might and Magic was difficult for adults, but in the same breath completable (AND enjoyable) by younger children. | I saw a LOT of nervous posts about Rabbids in here,and I was skeptical. But to be honest, I love the spin. The humor change is a nice change (And removes what has been 30 years of stagnating Mario humor.) And the variety in the Rabbids are amazing. I laugh the most at Rabbid Princess and she stays in my party full-time just for the comedy value. But they’re all adorable. | The mix of enemies is absolutely hilarious as well. The idea of combining CRAZY Rabbid + = Ludicrous enemy is awesome. World 1 boss is hilarious. (Hint/Spoiler-ish: Use Rabbid Princess at least once to trigger the World 1 boss, and pay close attention to her mouth…) | There is plenty of built-in replayability. From getting perfect on every combat area, to replaying world with new abilities to unlock new areas, to the Toad challenges and such, I feel that I will be at this a long time. | There is PLENTY of obscure adult humor in this, as is my hint above. | This game isn’t without its weaknesses however. The lack of platform feel to the game when out of combat is TERRIBLE. Even with the fixed feel to Paper Mario, it still had a sort of platform feel to it. However, with Beep-O (Or as our entire house calls Beep-O, Rhoomba) leading the pack, there is no jumping, no sliding, nothing besides what is scripted from interacting with something like a pipe (And they ‘roll’ through pipes… Wha?) Maybe further in the game, but now, its not there. | Also, the combat vs exploration. | Combat is nice, fluid, and very fun. However, I feel my mind tugging at thoughts like ‘Mario should be able to Goomba-stomp out of the box, not with an unlocked skill, and be able to do it without a boost’ and ‘Luigi in many Nintendo titles can jump higher and thus likely further than Mario.’ – I get balance would be tough, but many of us die-hards may struggle with these nuances of character. I would have liked to see Mario rely more exclusively on head jumps, and Rabbids rely on guns. | Exploration, at least as far as I’m in, is pretty much non-existent. Very linear, which is unfortunate. Many times, you go from fight, walk 5 blocks away, and bam, another fight. Rinse, repeat. Even the ‘secrets’ and ‘puzzles’ are weak at best so far. The collections are almost insulting. You have to do it to unlock weapons, but it feels insulting finding 3d art, murals or soundtracks in a box. | HOWEVER, at the end of the day, what they have set out to do in this game, they have done BEAUTIFULLY. I have been BURIED in the game since I got it, and it is FLAT OUT FUN. If you like a little turn-based strat, you will love this. If you like Mario and want a new demented spin on humor, you will love this. 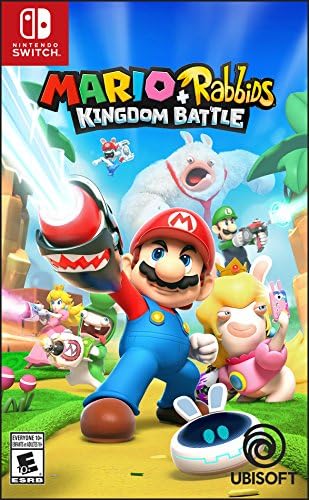