Apparently, these have the ANC function – you need to activate the ANC mode by pressing and holding one of the touch buttons on them to get them going.

I’ve never used Taotronics, have always been an MPOW person, but was disappointed the ANC on the Mpow X3 and have been looking for a good but cheap ANC TWS pair for a while.

Amazon product: True Wireless Earbuds, TaoTronics Hybrid Active Noise Cancelling TWS Headphones, Bluetooth 5.1 Earphones with Single/Twin Mode, Touch Control, 32H Playtime, USB C Charging In-Ear Stereo Headset with Mic
Customer Reviews:
To begin, I have a job which requires me to be focused and efficient in a loud environment. I have owned several pair of TaoTronics headphone (wired and wireless) even before their wireless series become popular, I really like the fact that they put thought into their design and it is never ugly or generic. For the past 12 months, I have been using the SoundLiberty 53 until I lost them, then I moved on to the SoundLiberty 79 (Which I will refer to over and over in this review). Both eardbuds were good, and sounded decent and their battery lasted really long, but none of them has offer noise cancellation, only noise ISOLATION… until this SoundLiberty 94. | So now lets take a look are some pros and cons: | THE PROS/WHAT I AM IMPRESSED: | 1. Audio Quality – compared to SoundLiberty 53 and 79, I found the base, mid, and highs all stand out very well (especially the vocal). I am not an audiophile, for the past 2 days, I used it to listen to audiobook almost exclusively and it had served me well. Sound is very crisp and clear, and I hear music, vocals, and sounds extremely clear, I did a typical Audio Test on Youtube, the audio capability is between 10Hz-15000Hz. Don’t count me on this as the absolute performance, I don’t really care about the range, because like I said, my audio consumption is typically audiobook and occasionally music. | 2. Noise Cancellation – This is THE feature I have been searching for. For the longest time there were 2 options for people that want to get noise cancellation. Either you get Over-the-ear headphones, or those bulky Sony WF-1000XM3 earbud. If you are in the market for a ANC Earbuds you know theres limited choice, especially in a small form factor. As for ANC ability, it helped blocked out my clock ticking, that is one distraction, other than that, I havent got much to comment. I just like the size of it. | 2. Battery Life – Amazing! Been listening to them when I am working from home for 4-6 hrs a day, today is the 2nd day and it still going strong. Yes, i did put them back into the case to charge, but the earbuds never reach the point that it’ll tells me the battery is low. Also I haven’t needed to charge the case yet, it still have 2 bars/dots! I am not trying to exaggerate but with below 50% volume these buds can go for days. | 3. Fitment and Comfort – As a pair of ANC earbud, this is SUPER COMPACT and LIGHT, I can wear them for a few hours without feeling any pain in my ear, and the design is even better than the SoundLiberty 79. The ear tips is the good translucent soft silicon and it is comfortable. You get 3 different silicone tips to choose from, with different diameter (sadly not length. I will also explain this in con) Earbud fits my ears nicely but I have average to smaller ears. | 5. Bluetooth – Amazing. Very easy to connect to iPhone/Android/Computer, sound great and loud at low volume. Connectivity is easily with 10 meters line of sight. I did 8 meters with 2 walls and it still work. The new Bluetooth standard is amazing. | 6. Microphone – The built in Mic worked way better than I expected!! I guess for an ANC headphone to capture noise well it must have better capability to capture sound well as well. In fact I think has no difference to my over-ear headphone’s mic. That said, I did a little test with the mic, I tried to record something while having Youtube airplane noise in the background, it does get recorded along with it. How much noise suppression it had is beyond my capability of test. | 7. The Shell: Once again, Taotronics did it! It is super small and elegant. They also fixed the annoying loose calm-shell case problem of the SoundLiberty 79 so I can vouch that the case is PERFECT. I have attached photo to show u how small is the case, compare to SoundLiberty 79 and another brand. | THE CONS/WHAT COULD BE IMPROVED: | 1. Earbud Fitting: The earbud comes with 3 size of earbuds. I might have been spoiled by the Taotraonics SoundLiberty 79 which gives 6 different fitment. I think if they manage to keep that tradition with a few pennies of additional cost, it would have given a wider range of audience a better fitment guarantee. (I had to try all 6 earbud in SoundLiberty79 to made it comfortable! Fortunately the Sound Liberty 94 is more comfortable than 79! So It didnt become a problem for me. But Taotronics, why not give people more earbud tips so it will lower the chance of people end up returning it. | 2. ANC Hiss: This is apparent after listening to something and the low tone hiss wouldn’t go away. The workaround is to press on the left ear and turn off and on the ANC. | In summary, for $70-80 Canadian these headphones are amazing value for everything you get, I think the TaoTronics SL94 is a great addition to your wireless collection if you listen to music in an environment that has distracting noise in the background! 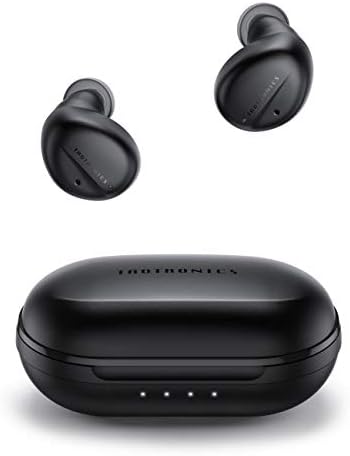