Amazon product: ELAC Debut 2.0 B6.2 Bookshelf Speakers, Black (Pair)
Customer Reviews:
I used these Elac speakers to replace my Logitech computer speakers. I’ve been upgrading my computer systems from cheap speaker to more expensive cheap speakers and never achieving great sound. With the advent of high bit rate YouTube channels, Tidal, Roon, and other high res streaming services, and my own dabbling in recording my vinyl collection, I’ve come to realize that I have to get out of the good-enough league and join the big league. So adding ELAC speakers to my computer system is the first step. This will no doubt lead to better DACs, better Amps, and ultimately to an entire ELAC home theater system, but I’ll worry about that later. | These speakers are rated at 44-35,000 Hz. Through a YouTube tone sweep, I have found that my old ears can HEAR the 45Hz-14kHz range. Anything above that is lost to me, so to fill in the low end I’ve added a Dayton Audio bass shaker to my computer chair, allowing me to feel the 5-45 Hz range. | Placed beside my Boston Acoustic CR9s from the late 90s, The Bostons seemed to have a deeper but more uncontrolled bass response. They do have a bigger cabinet, and are rear ported but I could imagine the speaker cone deflecting wildly with the bass it was being asked to reproduce. I would gladly replace the Bostons with the ELACs given the tighter response and control those speakers exhibit. To be fair, BA has evolved over the last few decades as well, so modern Bostons might still be very competitive – but not at this price point. | I’m mainly listening near-field – the speaker baffles are flush with my computer monitor. They are very forward and authoritative – The mid to highs show off every flaw in my recorded vinyl (so now I can make a list of recordings I have to fix), but the bass absolutely kicks! For now I’m using a cheap amp – the SMSL AD18 HiFi Audio Stereo Amplifier with Bluetooth 4.2, and the sound is not disappointing. The ELACs seemed a little harsh at first, but as they relaxed, and as I got over the initial ‘let’s rock these babies’ and turned down the volume, they started to sound a lot more pleasant. I love the front firing port so I don’t have to worry about placing them up against the wall behind the computer desk. | I haven’t found many CONS yet. | If I wanted smaller ELACs I certainly could have found smaller ones, but not for the price I paid for these. | The rubber inserts that hold the speaker grill to the enclosure hold on extremely tightly. If you’re the kind of person to remove and replace the grill often, get a soft tool to do the job. | The speakers didn’t come with rubber feet or pads so I placed mine on some closed cell foam while I look for a better alternative. Otherwise objects on my desk rattle with the speakers at higher volumes. 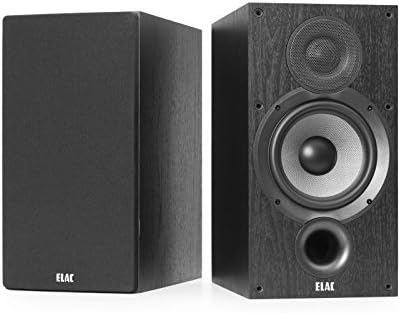